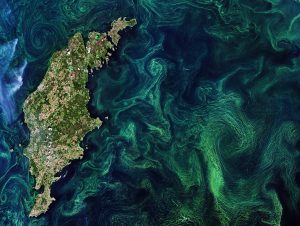 The Copernicus Sentinel-2 mission takes us over the green algae blooms swirling around the Baltic Sea.

‘Algae bloom’ is the term used to describe the rapid multiplying of phytoplankton – microscopic marine plants that drift on or near the surface of the sea. The chlorophyll that phytoplankton use for photosynthesis collectively tints the surrounding ocean waters, providing a way of detecting these tiny organisms from space.

In most of the Baltic Sea, there are two annual blooms – the spring bloom and the cyanobacterial (also called blue-green algae) bloom in late summer.  The Baltic Sea faces many serious challenges, including toxic pollutants, deep-water oxygen deficiencies, and toxic blooms of cyanobacteria affecting the ecosystem, aquaculture and tourism.

Cyanobacteria have qualities similar to algae and thrive on phosphorus in the water. High water temperatures and sunny, calm weather often lead to particularly large blooms that pose problems to the ecosystem.

In this image captured on 20 July 2019, the streaks, eddies and whirls of the late summer blooms, mixed by winds and currents, are clearly visible. Without in situ measurements, it is difficult to distinguish the type of algae that covers the sea as many different types of algae grow in these waters.

The highest concentrations of algal blooms are said to occur in the Central Baltic and around the island of Gotland, visible to the left in the image.

Although algal blooms are a natural and essential part of life in the sea, human activity is also said to increase the number of annual blooms. Agricultural and industrial run-off pours fertilisers into the sea, providing additional nutrients algae need to form large blooms.

The bacteria that consume the decaying plants suck oxygen out of the water, creating dead zones where fish cannot survive. Large summer blooms can contain toxic algae that are dangerous for both humans and other animals.

Satellite data can track the growth and spread of harmful algae blooms in order to alert and mitigate against damaging impacts for tourism and fishing industries.

This image is also featured on the Earth from Space video programme.